I recently did a piece for Sightline on the prospects for proportional representation in British Columbia’s upcoming referendum. The takeaway was that it could pass this time, unlike in 2005 and 2009, because “spoiler voting” by BC Greens is giving the major parties a reason to want to aggregate their votes in multi-seat districts. Calvo (2009) gives the best account of how this works.

This most recent referendum is the product of a deal between the BC New Democratic and BC Green parties. The NDP minority government exists with support from three Green members of the Legislative Assembly. The Liberals are one seat shy of a majority. In the previous two referenda, the third-party vote that brought them about evaporated over the course of the 2000s.

Three things need to happen for this next referendum to pass. Each seems to be in place.

First, there needs to be support from one or both of the major parties (New Democrats or Liberals). That requires a credible threat of continued third-party voting, and the latest polls I’ve seen look good for that.

Second, the major parties cannot feel that they can gerrymander their way out of a spoiler problem. One way for that to be true is for third- and major-party voters to be very mixed together. This would make it difficult to “pack and crack” the Green vote. It seems like this mix obtains. In the 2017 elections, Greens polled enough votes to plausibly have spoiled NDP candidates in 17 of 43 ridings won by Liberals. The average NDP vote in such a district was seven points greater than the average NDP vote in a district that the party carried. Turning to the Liberal Party, Greens won enough votes to plausibly have spoiled Liberal candidates in 15 of 41 districts won by NDP candidates. The average Liberal vote in such a district also was seven points greater than the average Liberal vote in a district that this party carried. So, in sum, Greens poll well in regions where NDP and Liberal voters also concentrate, respectively. Gerrymandering is therefore beyond reach. (I do not take for granted that Canada’s independent redistricting rules eliminate the possibility of a gerrymander. This is an endogenous institution, just like the voting system.)

Second, the major party (or parties) cannot see the Alternative Vote as a way to solve their spoiler problem. AV is very much on the agenda in Canada as a substitute for PR. As I argue in a recent piece on Maine, AV becomes palatable to a major party when it’s clear that party will benefit from strategic use of second-choice votes.

But federal politics are not provincial politics, and we do not have data on second choices at that level.

What we do have, though, are provincial vote intention and attitudes toward a range of policy issues. So, I estimated ideal points for 1,370 BC respondents and 35 survey items having policy content. Below are the density plots. Yes, most Liberal-leaning respondents are closer to the Conservative Party than they are to Greens. But we also see a bloc of Liberals who agree with Greens at least on some issues. Overall, BC Liberal respondents are spread across much of this policy space. It is far from clear, in other words, which party would “clean up” on transfers in an AV world. 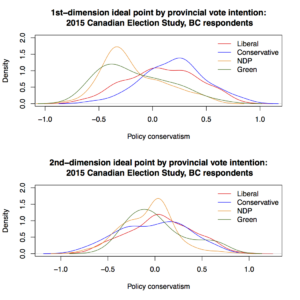 The plot thickens. Today I found a blog post by Werner Antweiler of the Sauder School of Business, UBC. In the aftermath of the last election, he wrote:

Antweiler gives circumstantial evidence that the Green Party surge — it doubled its vote share to 17 percent — was due to new voters. That suggests two things to me: these people are unlikely to systematically “go home” to either major party (with hypothetical second-choice votes or the current system), and they have been mobilized. That means further seats-votes disproportionality at the expense of major parties — a problem that they cannot solve without some form of proportional representation.

These seem like good conditions for a PR win in October-November.