On Friday, I showed NOMINATE scores for Cincinnati City Council members elected under permissive rules. Polarization was super low* for some years because, in each of those years, a lone wolf was able to play coalition kingmaker in a hung parliament.**

Now look at 1947, which is new in this plot, and watch those parties diverge. Yup. STV is totally compatible with high levels of polarization. (I never said it wasn’t.) 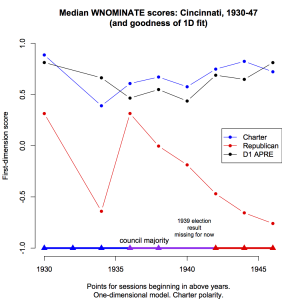 There are a few things going on behind the scenes. First, no more kingmaker. But I think one comes back in the mid-50s, so stay tuned.

The second thing is a lot less aisle-crossing between Charter*** and the Republicans. Some of this is the local Republican Party getting its act together. In this year, for instance, a Charter Party statesman dies, and the Republican council majority (abrogating a so-called gentlemen’s agreement) fills the vacancy not with a Charterite but with another Republican. Then the Republican Mayor resigns, and the majority replaces him with this guy. And, boy, he’s a hammer.

Fun fact: the most loyally Republican council member is Jesse Locker, anchoring the Cincy GOP out there at -1.0. But he’s no stooge. Police brutality is a big issue in the second half of the session. We’ll see what the data say, but I think this polarized two-party system is about to implode.

*Polarization might even be lower than I showed yesterday. The new graph uses party medians, which are a little truer to this intellectual framework than the party means in the other graph.

**True, the Great Depression probably helped lone wolf get elected. But note how those years also see U.S. House polarization plummet. Bigelow goes off to Congress in ’36. A 2D fit isn’t great for the 75th, and Bigelow clocks in pretty darn close to the southern pole, with all the DFL and Progressive types.

Also, “kingmaker” doesn’t accurately capture what was happening in the Bigelow/Craig years. That term implies one person (or bloc) selectively awarding majorities to one or another bloc. Rather, Bigelow and Craig are crafting ad hoc majorities that split the two big parties.

***At the time, essentially a coalition of Democrats and GOP “machine” defectors.