If you are reading this, you know that 24 U.S. cities tried the STV form of proportional representation. Here is an updated chart summarizing those episodes. 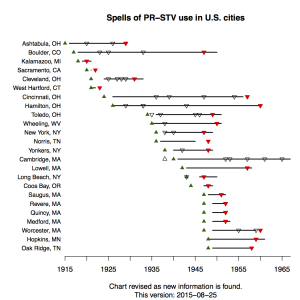 1) Cropping to 1965, since events thereafter are basically chartjunk.

3) Changing the dates for Oak Ridge, TN, which evidence suggests to have emerged with STV a decade later than I thought. Note that the Oak Ridge council was “advisory,” whatever that means.

4) Adding Norris, TN, which I had not included because I could not find the dates of any STV elections. This Town Council was also “advisory.” Elections were held annually from 1937 through 1945. I cannot find evidence of an STV election post-1945. The federal government sold Norris to a developer in 1948, and Tennessee granted Norris its own charter in 1949.

5) Date-stamping, since this chart may evolve gain.

Please share any suggested, further changes. Wouldn’t it be nice if our state and local politics were better documented?