What follows is from a conference paper given in 1985, at the Annual Meeting of the American Political Science Association (New Orleans). Hermens was wrong about a lot. An example is his insistence on the phrase “majority voting,” which he used to describe anything other than “PR” (which also does not convey much information). On other things, he seems to have been right.

The paper was written in a period of re-polarization. The advice to embrace “majority voting” should be viewed with that development in mind.

Dr. Hallett, who has carried the American banner for P.R. for so many years, recently published an essay entitled “Proportional Representation with the Single Transferable Vote: A Basic Requirement for Legislative Elections.” He considers P.R. a logical implication of the “one-man one-vote” rule and has expressed hope that the Supreme Court will declare it a requirement of the Constitution. This point will apparently be argued before the Court in the case of Davis vs. Bandemer, which centers on gerrymandering, but has caused proponents of P.R. to state that no redistricting under majority voting will do; it has to be P.R. all the way, and the Single Transferable Vote (STV) at that.

In an examination of the issues involved it might be useful to recall what Walter Lippmann wrote two generations ago: “For the most part, we do not first see and then define; we define first and then see.” This statement is more relevant now than it was when originally made, and nowhere more so than in a discussion of electoral systems. In the case of P.R. all essential problems arise from the fact that its proponents first use a concept of representation which takes much for granted of which they ought to prove, and then sees everything in light of that concept. They are thereby depriving themselves of a chance to observe any of the drawbacks which result from the application of P.R. while ignoring the positive aspects of what majority voting contributes to the democratic process.

Many people, on studying the matter, have come to the same conclusion.

Another serious objection is that a heavy additional burden is imposed on the voter by requiring him to indicate several names in the order of his preference instead of indicating but one choice, as in the other systems. This burden the voter would be very loth to assume, since it is with difficulty that voters are induced to discharge the duties already imposed upon them.

While the Hare system is meticulously more accurate as a plan of propor­tional representation than the Free List system so widely used on the continent of Europe, it is certain that for the election of members of our state legislatures or of our Congress, the Free List plan (with its close approximation to complete proportional representation) would be much more in accord with our voting habits and consequently much more acceptable and intelligible to the voters.

All states except Alabama and Oklahoma did not require the voter to register more than a first choice for any office. It seems to have been quite common in all the states indicated above that a great many voters failed to avail themselves of the privilege of registering second or more choices, which resulted in the practical restoration of the plurality system in many primary races. This failure was due to several causes: ignorance of the voter; his desire not to have his vote counted for any but his first choice; or his refusal to accept what was thought to be a complicated system, which, it was felt, could be easily corrupted or readily subject to mistakes in the count, or which seemed to provide for an unfair method of evaluating choices.

Under the list plan, the voters would have to choose only one candidate, the best man from the group which they favored most. The results of the election would be known shortly after the single-preference votes had been counted. It is urged that the proposed system would probably lessen constitutional difficulties, simplify the task of the voter, save the expense and delay of the Hare count, and give substantially the same results. 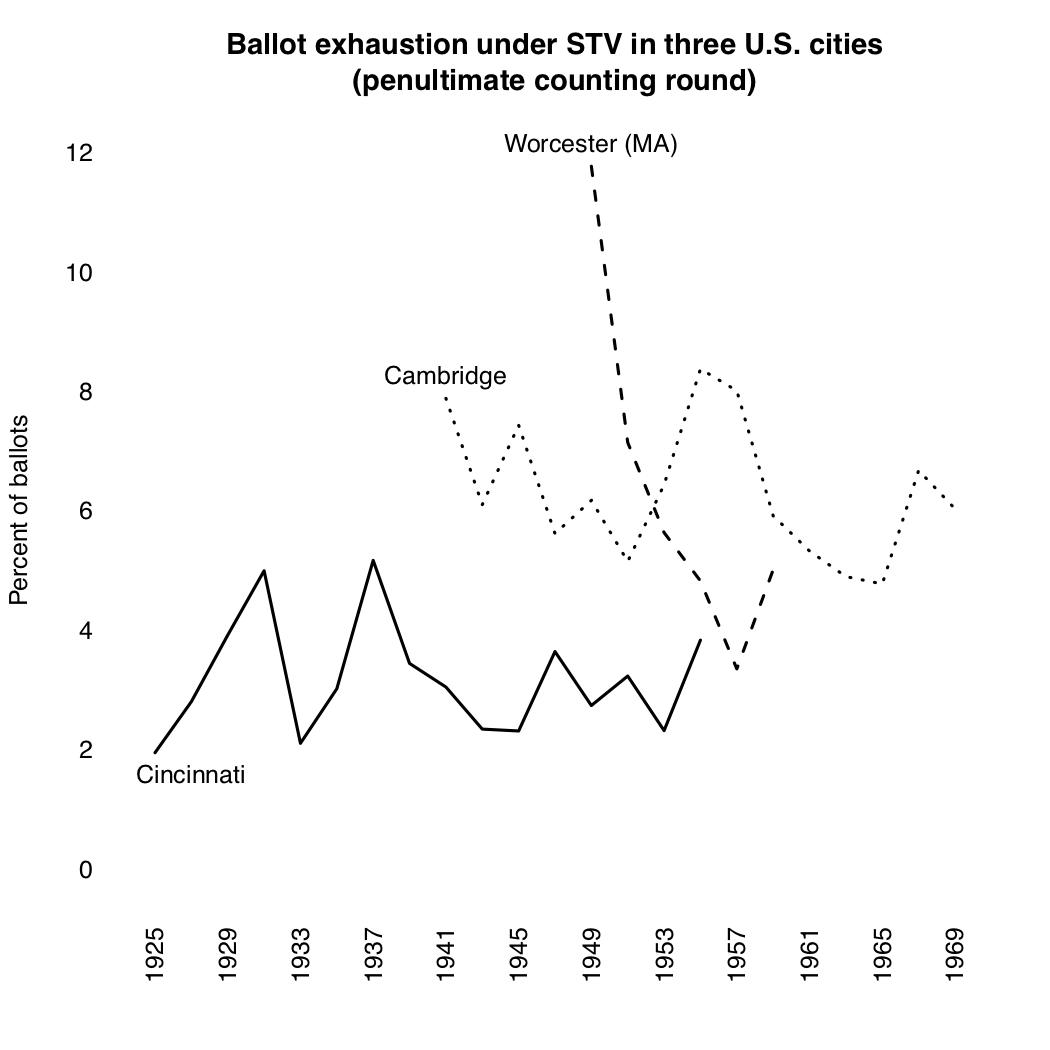