What did ballots look like in American single transferable vote elections? I can’t find examples, so I am licensing these photos for public use. The ballots are from Worcester, Massachusetts, which held six PR elections, 1949-59. Please tell me if you know of PR ballots from other cities.

Below is a demonstration ballot from the 1955 election. Note how it gives the residential address of each candidate. It also says which candidates are incumbents.

Below is the outer part of an official ballot from the 1959 election. It was folded lengthwise, and the voter marked their preferences on the inside.

Below is the inner part of the same. 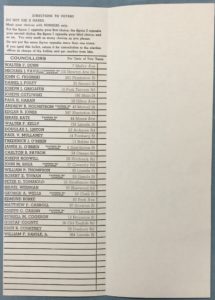 Worcester voters repealed PR on November 8, 1960, after Democrats in the Citizens’ Plan E Association (CEA) reversed their previously favorable position. CEA was a joint endorsement scheme of the regular Republican Party and self-styled reform Democrats who supported PR in 1947.

It is interesting that the local AFL-CIO announced opposition to PR in December 1959. Massachusetts’ unions merged in 1958, and labor supported PR before then. Note that the CIO-affiliated Steelworkers ended PR in Cincinnati in 1957, partly at the behest of the national AFL-CIO Industrial Union Department.

Each image is licensed under a Creative Commons Attribution-ShareAlike 4.0 International License.