Realignment can go in either of two directions.

During and after last year’s election, four claims appeared quite a bit:

I tested these claims with a new set of data on public opinion in the run-up to voting. Strictly speaking, it doesn’t tell us directly about the candidates’ positions.

But the data do tell us about the people in this or that voting bloc. Maybe that is what we really want to know if we care about how a coalition gets built — especially going into 2018.

The results of my analysis:

I know these results may sound jarring. In an earlier version of this post, I concluded with something like, “I just let my computer chomp on the data.”

If I were a Republican or Democratic strategist, however, I would be looking for untapped markets. In particular, I would be sniffing around the dimension perpendicular to present-day party competition. You can see it in the plot just below. The points are survey respondents — blue if they voted for Clinton, red if they voted for Trump. The lines are divides on some policy questions. (My analysis included 60 questions. Answers to those determine each person’s location.) 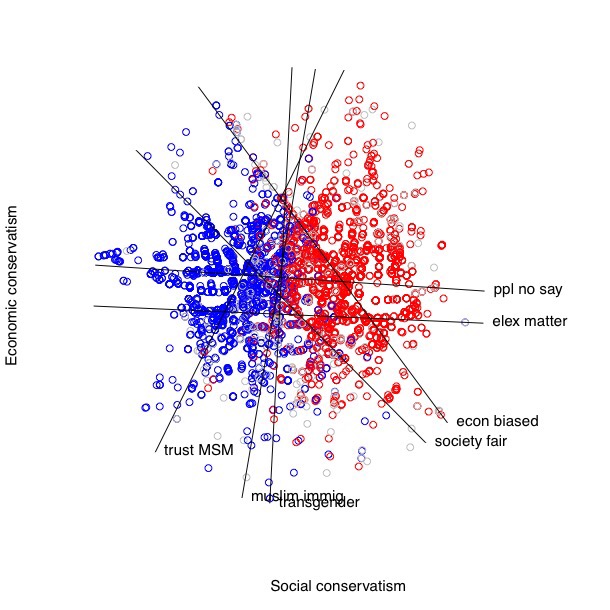 If I were a Republican strategist, I would see an opportunity to build a national, majority party by getting serious about New Deal-type economic policy. Consider a news report from yesterday:

[Bannon] was looking, [President, American Federation of Teachers] said, for some common ground that could assist him in realigning the two parties, his long-term goal in politics.

Of course, as a Republican strategist, I would need to worry about the fiscal conservatives in my party. It’s worth noting that FDR and Truman faced similar challenges.

And if I were a Democratic strategist, I would worry about slipping into long-term minority status:

…the next Democratic nominee may well end up caught in the same trap in which Hillary Clinton found herself, stuck defending the legacy of the two-term Obama Presidency, even as the economic dislocations of the Obama era fuelled the rise of populism on both left and right.

Or, as one analyst put it:

This means that there is a huge opportunity for the side that first figures out how to assemble a diverse coalition that speaks to voters.

The long-term danger (or opportunity) stems from the fact that coalitions are sticky. Once people start to vote some way, they tend to continue voting that way.

Now, if all I cared about were social-justice issues, I would be worried about which coalition took shape. I would be asking: which party is likely to do the right thing? And: what must we do to prop up that party?