They blocked RCV. It’s hard to say why.

At the same time that they use it in party primaries, Maine voters this June will vote a second time on retaining ranked-choice voting. This second referendum is the next stage of a people’s veto, a citizen-initiative process that can overturn acts of the legislature. The first stage was collecting more than 66,000 valid signatures, or 10 percent of votes cast in the last gubernatorial election.

What brought about the people’s veto was a classic, legislative roll. Last October 23, in a special session, eleven Maine Democrats joined their Republican colleagues to scuttle ranked-choice voting. This behavior was strange because the Democratic Party is poised to benefit, at least as public sentiment now stands.

“An Act To Bring Maine’s Ranked-choice Voting Law into Constitutional Compliance” passed with 68 yeas, 63 nays, 1 excused, and 19 absent. According to the League of Women Voters, the bill “delays implementation of ranked choice voting until the 2022 elections and repeals the law entirely unless a constitutional amendment passes before then.”

Not much has been said about those 11 Democrats who voted with the Republican Party, enabling the Senate and Governor to enact the repeal law. (LePage pocket-signed it.)

As a first cut, I asked whether anything in the roll-call record might indicate a group of Democrats who should not want RCV. To do this, I obtained the first 477 roll-call votes of the 128th Maine House. (The repeal bill was number 475). Then I scaled the votes in one, two, and three dimensions. Here is the division on the repeal bill. The Democrats who rolled their party appear in boldface-black. One thing we might expect to see is a cleavage in the Democratic Party. Another possibility is evidence of high dimensionality. 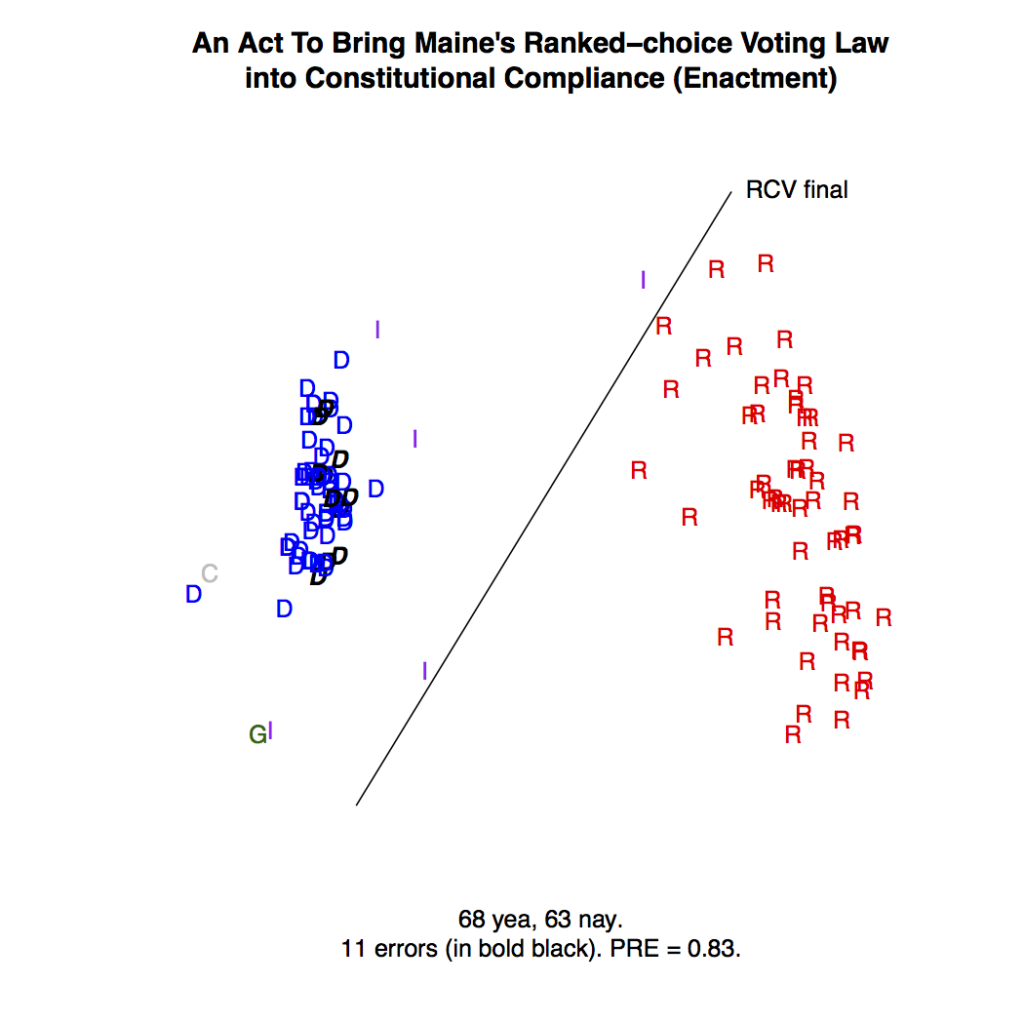 As you can see, there is no apparent relationship between the 11 Democrats’ past voting behavior and their votes on RCV repeal. We don’t even need more than one dimension to “explain” the vote; the PRE is 0.8253968 in all three models. It should have been a party-line affair.

It may be that district factors explain their voting. Perhaps they believe that, while RCV would be good for their party on a statewide level, it harms their re-election prospects. I have not yet tested that explanation.

One thought on “Eleven Maine Democrats”