We are going into another season of reform. A friend asks: “do you have a favored electoral reform or does FPTP make the most sense given America’s racial diversity?”

The short answer is: no favorite, and my (personal) yea/nay mostly depends on comparing the specific status quo with the specific replacement proposal.

Beyond that, here are some things I tend to think about when evaluating reform proposals. These are just quick thoughts, written on my way to bed.

1. The composition of a reform coalition is a pretty good signal of possible policy effects.

2. Generally, the public does not shape its own preferences. We form opinions about candidates (and reforms!) by consuming media and talking to friends (who also consume media). The same probably goes for marking ballots.

3. Every community tends to cleave into two opposing camps. This is related to the process by which our views get shaped. It may not happen immediately, but if you have to place a bet, you should bet that it will happen.

4. No coalition lasts forever, which probably is good, but you still have to live with the winning one, which might (or might not) be bad.

5. Details are crucial, even if they tend to fly under the radar. Even with PR writ large. For example, is there some guarantee that the minority (which might be you) will be at the table?

6. The fact that we’re even talking about reform is interesting in itself.

7. We live in a context of diminishing voting rights. Things may or may not get worse.

In updating some graphs today, I discovered something interesting (but not entirely unexpected). The House of Representatives appears to be de-polarizing.

Why? COVID-19 stimulus bills, “ends-against-the-middle” voting (one, two), something else?

Of course, it’s also possible that this is just a blip.

The graphs begin in 1856-7, which is the first session with both Republicans and Democrats in the House (data). Here is the usual plot, based on distances between the party medians: 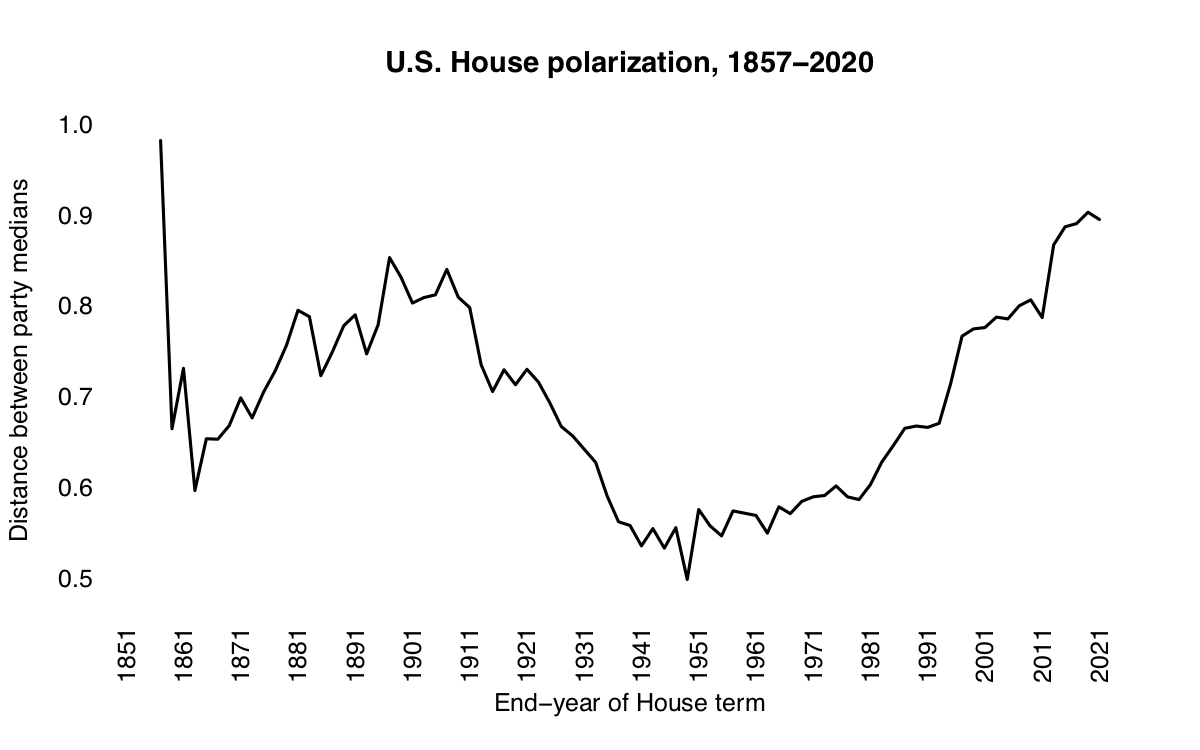 And here is another with distances between the party means: 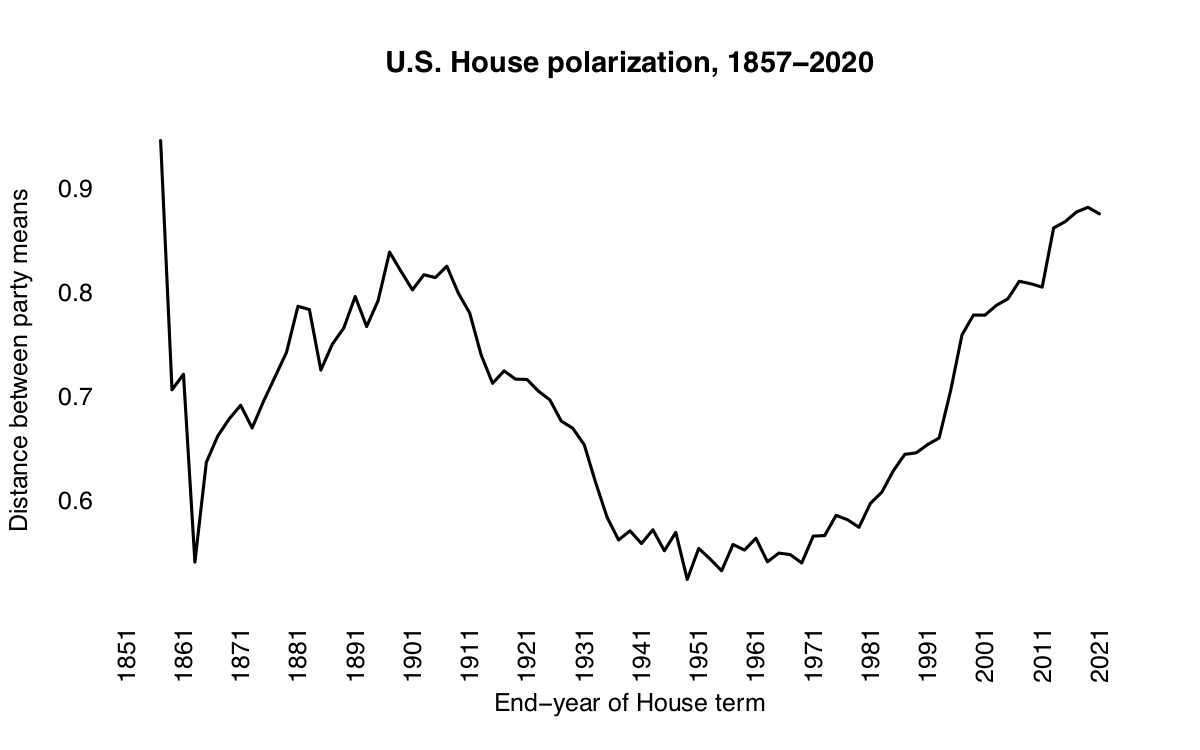 Thanks to Dr. Jennie Sweet-Cushman for the prod.

The current PR (aka RCV) movement is very much a continuation of one that died in the 1960s. That is, this movement has come out of abeyance.

Since most of the work is concentrated in cities, here are two essential pieces of political science.

In the old days, winning PR (and ranked ballots in general) depended on political compromise — combining the desired reform with rules that other people wanted. And, as I have shown in research, this made it easy for many cities to remove PR from such “packages” on adoption.

The first piece argues that reformers were successful where (a) middle-class people could be made to fear immigrants and (b) Progressive Era voting restrictions allowed the middle class to constitute a referendum majority. Note that, in this paper, PR charters are not distinguished from non-PR charters.

The second piece argues that, after voting rights were restored, reforms developed during the Progressive Era spread throughout the American South, as a way to dilute the votes of re-enfranchised persons. Needless to say, these later “reforms” did not include PR.

Some are likely shaking their heads at a piece I co-authored last week. This is partly why I wrote it. Our generation can have effects that are unforeseeable, and that we might deeply regret.